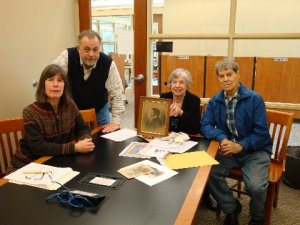 A 175-year-old sketch of Adam Huntsman has been donated by his descendants as a gift to the East Tennessee Historical Society.

Patricia Grames Pollock, great-great granddaughter of the one-term congressman from Tennessee, presented it on behalf of her family to Michele MacDonald, Curator of Collections for the society, on February 25. It had been passed down to her father, Charles M. Grames, by his mother Edith (Huntsman) Grames, who was Huntsman’s granddaughter.

Adam Huntsman (1786-1849) was a Virginia native who came to Knox County, Tennessee in 1809, where he settled for about three years. It was here that he studied law under John Williams, one of Knoxville’s most prominent attorneys in the early nineteenth century and later a United States Senator. The legal skills he learned from Williams he carried with him westward to Overton County and later Madison County, Tennessee, where he became a highly regarded criminal lawyer. 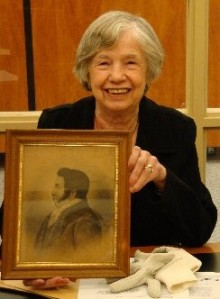 But it was politics that was Huntsman’s passion: he was a leader of the Democratic Party in West Tennessee in the 1830s and 1840s and corresponded with notable politicians of his day such as Andrew Jackson, James K. Polk, James Buchanan, and John C. Calhoun. He served four terms in the Tennessee state senate and defeated David Crockett for the Twelfth Congressional seat in 1835, a loss that led to Crockett’s journey to Texas and his death at the Alamo.

The sketch is believed to have been done circa 1835 or 1836 while Huntsman served in Congress. Family tradition states that it was the work of an African-American woman who drew it with her foot!

Mrs. Pollock is pleased the East Tennessee Historical Society agreed to add it to their collection. “This fine old sketch deserves a permanent home where people can see it,” she said.

If I had to pick my favorite American President on this Presidents’ Day, it would have to be James K. Polk, our 11th Chief Executive. 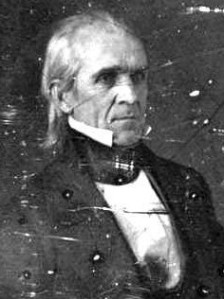 My fascination with Polk goes back to my childhood of memorizing the Presidents. He was a Tennessean (although a native of North Carolina) and a protege of our first Tennessee president, Andrew Jackson. He was the youngest man ever elected up to 1845 (49 years old when he was sworn in) and the first to sport long hair (a mullet, I suppose). He extended our country’s boundaries westward to the Pacific Ocean through negotiation with Great Britain and war with Mexico. He was probably the most dedicated and hardest working president, certainly in the first 60 years of the 19th Century.

(Polk also had ties to the subject of my latest book project, Tennessee lawyer and politician Adam Huntsman.)

I learned later that he had not been admired or adored as other men who held the office; in fact, he was somewhat devious and calculating. But he set his agenda, decided to accomplish it in one term, and he did it. Of course this work ethic prematurely aged him and likely contributed to his death at the age of 53, just three months after he left office.

In the last few decades, Polk has finally received his due in the pantheon of Presidential greatness. His most recent biographer believes him to be one of the greatest, certainly the greatest of the one-term chief executives.

Polk is also the subject of an upcoming documentary by Brian Rose, who explores his own fascination with the president. Here’s a few clips he has posted on YouTube:

This Presidents Day reminds me of my fascination as a child with American history and the men who served as our nation’s leaders.

When I was about 12 years old, I took it upon myself one summer to memorize the Presidents in order, from Washington to Reagan (at that time). My grandmother had a set of World Book Encyclopedias in the attic from the time my father and his brothers were kids. She also had a set of World Book Yearbooks that chronicled the events of every year since 1962. The 1962 edition had a section devoted to the Presidents, with facts, biographies, and pictures. I poured through that book, memorizing the Presidents. I even traced their pictures on sheets of notebook paper.

My grandmother and I would sit on her front porch in her swing as I recited the Presidents to her–in order, Washington to Reagan–as she looked in the book and checked my accuracy. And as best I remember, I was right more times than I wasn’t. And I can still recite them today, with a few selective omissions.

Almost 30 years later, that same book–along with the entire Encyclopedia set– now sits on my office bookshelf. Its spine is split from top to bottom, the back cover barely clinging to it. But I can open it and flip through its pages and remember that summer with Grandma.

Adam Huntsman, the subject of my latest book project, would be 223 years old today.

I grew up in Jackson, Tennessee, where he lived the last 26 years of his life. He will always be best known as the man who beat David Crockett for Congress in 1835, which led Crockett to Texas and his heroic death at the Alamo. But there’s a lot more that should be known about this colorful and eccentric frontier lawyer and politician.

His most distinguishing feature was a wooden peg leg. He used the artificial appendage to his advantage during his legal and political career. When he delivered a speech, he would pound it on the floor to emphasize a point he was making. It was also a visiable reminder of the sacrifice he made for his country, much to the chagrin of his political opponents. How he lost the limb has been the subject of speculation for many years: Crockett claimed it was lost “in an [I]ndian fight during the last war,” implying that it happened during the Creek War or the War of 1812. I have my own theory that I will share in my upcoming book.

Huntsman was born in Charlotte County, Virginia on 11 February 1786. I’ve tried in my research to identify his parents, but the best I’ve come up with is circumstantial evidence that points to Adam Huntsman (senior) and Jeane Francis of Charlotte County. (I can’t even prove–aside from the fact that she had married a Huntsman–that they were even married.) It’s certainly one of the more frustrating aspects of the project.

He left Virginia for Knox County, Tennessee, settling there about 1809. He studied law under John Williams and obtained his license, but he never hung his shingle there. It may have had something to do with his paternity of an illegitimate daughter in 1811. He moved to Overton County and practiced law in that area of Middle Tennessee until 1823. During this time, he served three terms in the Tennessee state senate representing Overton, White, and Jackson counties.

By 1823, Huntsman was married to Sarah Wesley Quarles and had moved to Madison County, where he settled four miles east of Jackson in the Cotton Grove community. He practiced law and was engaged in various civic and business activities. In 1827, he was elected as West Tennessee’s first senator to the General Assembly and served one term. He later represented Madison County at the state constitutional convention in 1834.

Huntsman was a staunch supporter of President Andrew Jackson and the fledgling Democratic Party in Tennessee. He enjoyed the game of politics and played an active role in various campaigns in West Tennessee throughout the 1830s and 1840s. In 1835, he opposed incumbent congressman David Crockett’s re-election bid in a lively campaign pitting masters of the stump speech and tall tale telling. (Huntsman was regarded as the better speaker of the two.) Huntsman won the election by 2,000 votes and served one term in the 24th Congress (1835-37). He stepped aside rather than seek re-election: his opponent would have been John Wesley Crockett, a fellow attorney and eldest son of his former opponent.

Huntsman corresponded for 13 years with fellow Tennessean James K. Polk, an exchange of letters that continued into Polk’s presidency (1845-49). He was nine years older than Polk and acted as an advisor to him while he served as Speaker of the U.S. House of Representatives, governor of Tennessee, and president of the United States. Huntsman first met Polk while serving as a state senator and Polk was its clerk. When Polk received the Democratic nomination for president in 1844, Huntsman congratulated him in his own humorous way:

“I suppose miracles will not cease in the land. To have supposed it possible that such a Possum looking fellow as you were twenty five years ago, would ever have [been] nominated for President of the United States would have been deemed Quixotism[.] But so it is, and we must make the best we can out of you.”

Huntsman noted that three former presidents–George Washington, James Madison, and Andrew Jackson–had no children. If Polk were to win (he too had no children), Huntsman noted “the World will believe that the qualifications of an American President lies all in his head, and none in his Breeches.”

Adam Huntsman died at his home on present-day Cotton Grove Road near Jackson, Tennessee on the evening of Thursday, 23 August 1849. He was 63 years old.

My book project on the life and political career of Adam Huntsman will be published later this year. If you would like to be notified when it is available, please send me an email here.