Hey, it turns out my blog isn’t worthless after all!

If you recall a post from November 28, there’s an applet that can tell you how much your blog is “worth” in dollars. Just for fun, I checked mine and it was priceless–in other words, it was worth exactly $0.00. It was a hard blow to take, but I held my head up and persevered into the new year. I went back and checked again today. Since then, I’ve had a noticeable markup in my blog’s worth!

Now I can keep going with my head held high! 🙂

I came across this interesting video while searching YouTube recently. The focus is a huge three-ring binder guarded by Joy Bland, family historian for the Descendants and Kin of David Crockett. I’ve had the pleasure of meeting Mrs. Bland several years ago when I was considering writing a small book on the life and political career of John Wesley Crockett, oldest son of David from his first marriage. She was extremely helpful and shared with me information and photos she had collected from her research. I’d still like to write that book someday.

For those independent league baseball fans who check my website Indy Leagues Graveyard, you might be wondering why there’s a domain default page there instead. (Actually I received an e-mail asking about it last week, but I just assumed it was because of the lack of updates for the past few months.) UPDATE: Now there’s a nice article about valium addiction, treatment, and withdrawal. Just the kind of information you’d go to a baseball site for!

Apparently the domain name expired without me knowing it and a company that will not be named swooped in and took it. I thought it had somehow been hijacked and I called the domain hosting company on the phone to figure out what was going on. The person explained they had tried contacting my old e-mail address, but needless to say their renewal reminders never reached me. (Sigh.) So now some non-baseball related website has the domain name I created back in 2002. No telling what they’re going to use it for.

A lesson for fellow webmasters: Make sure your contact information is current with your domain register!

To be honest, between publishing and promoting Hurst’s Wurst and other projects, I’ve not had much time to even work on Indy Leagues Graveyard in the past six months.

So I pose this question: Is there anyone out there remotely interested in me bringing it back? Did it help fill a void that would make it worth the price of a new domain name and hosting to revive it? Drop me a line and let me know what you think or leave your comment.

I’ve been a history buff (or nut, whichever one prefers) since I was a little kid. I wanted to stop and read every roadside Tennessee historical marker and practically every family vacation included some kind of historical attraction for my benefit. My grandparents also tolerated my interests and did the same when I went places with them. And I always wanted to stop at the gift shop (there’s always one at the end of the tour) and buy a souvenir. Unlike other kids who wanted some kind of toy, I wanted a book. Usually it was one of those inexpensive ones that had pictures of the historic site and told the story behind it. 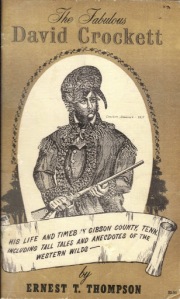 One of the first such books I remember getting was The Fabulous David Crockett: His Life and Times in Gibson County, Tenn. Including Tall Tales and Anecdotes of the Western Wilds. (What a title!) It was written by Ernest T. Thompson and published by the David Crockett Memorial Association in 1956. Mine was purchased sometime in the late 1970s at the David Crockett Home in Rutherford, Tennessee.

This 58-page paperback was somewhat dated by the time I read it, but still it introduced me to the famous frontiersman David (don’t call ’em Davy) Crockett, native Tennessean and defender of the Alamo. It was the real person, not the cartoon character created by Walt Disney who could grin down bears and other nonsense. The beginning explained how the Crockett home near the small town of Rutherford had been saved by a local banker, who bought it from a farmer for $25 before it was to be destroyed in 1934 . But it wasn’t until 1955 that the dismantled cabin was rebuilt with funds from a state grant.

The book went on to tell the life of the real David Crockett, from the mountains of East Tennessee through Middle Tennessee and onto West Tennessee, losing his last political campaign to Adam Huntsman, and leaving to seek better fortunes in Texas. It also included several illustrations taken from the Crockett Almanacs that were published during his lifetime and for many years afterward. The Fabulous David Crockett was a wonderful introduction to a colorful life. It also introduced me to Adam Huntsman, who opposed Crockett for re-election ton Congress in 1835.

Not too long ago, I read that Mr. Thompson currently lives at a nursing home in Humboldt, Tennessee. I’d sure like to meet him some day and thank him for helping spark my interest in Crockett and Tennessee history.

Continuing to go back and update my earlier books, I’ve decided to publish a second edition of The Peg-Legged Politician: The Life of Adam Huntsman. It was one of what I call my “Kinko’s books” that I had copied and bound at Kinko’s Copies in Nashville, TN in 1996. I really didn’t promote it and only make a few copies, primarily for the Tennessee Room at the Jackson-Madison County Public Library and the Tennessee State Library and Archives. Now twelve years later, I’d like to fix it up a bit, add some new information, and publish it as a perfect bound, paperback book.

Who was Adam Huntsman, you may ask? Most Tennesseans know that David Crockett (not Davy of the Walt Disney films) made his fateful journey to Texas, the Alamo, and glory after losing his Congressional seat in 1835. He lost to a clever and talented lawyer and politician named Adam Huntsman, who gave the Democratic Party a bit of revenge against their former ally. He wore a wooden prosthesis for the leg he lost, supposedly in the Creek War or the War of 1812, that only added to his colorful character. It also earned him such complimentary nicknames as “Peg-leg” and “Timber Toe.”

Adam Huntsman could be every bit the storyteller and prankster that Crockett was for the voters, but he was also a skillful composer of satirical articles for the newspapers that entertained and drew others to his point of view. His “Book of Chronicles, West of the Tennessee and East of the Mississippi” was perhaps his best work and was credited by David Crockett himself for his defeat in the 1831 Congressional election. It was written like prose from the Holy Bible and told the story of David, who belonged “to the tribe of Tennessee, which lay upon the border of the Mississippi and over against Kentucky” and “was chosen by the people in the river country, to go with the wise men of the tribe of Tennessee to the grand Sanhedrim held yearly…at the city of Washington.” But David was led astray by “wicked men sons of Beleal, to wit: the Claytonites, the Holmesites, the Burghesities, the Everettities, the Chiltonites, and the Baronites…who hated Andrew [who was “chief ruler over the children of Columbia”].”

(Of course Andrew was President Andrew Jackson, the Claytonites were Senator Henry Clay and his supporters, and the “grand Sanhedrim” was Congress.)

Politics was the chief form of entertainment for the people of the frontier and Adam Huntsman made it all the more fun and entertaining for the people of Madison County and West Tennessee. I’ll have some more to say about ol’ Adam as time goes by. I’m looking forward to reacquainting myself with him this year.

I hope everyone who reads the blog has a blessed, prosperous, and Happy New Year! Thank you very much for your support.